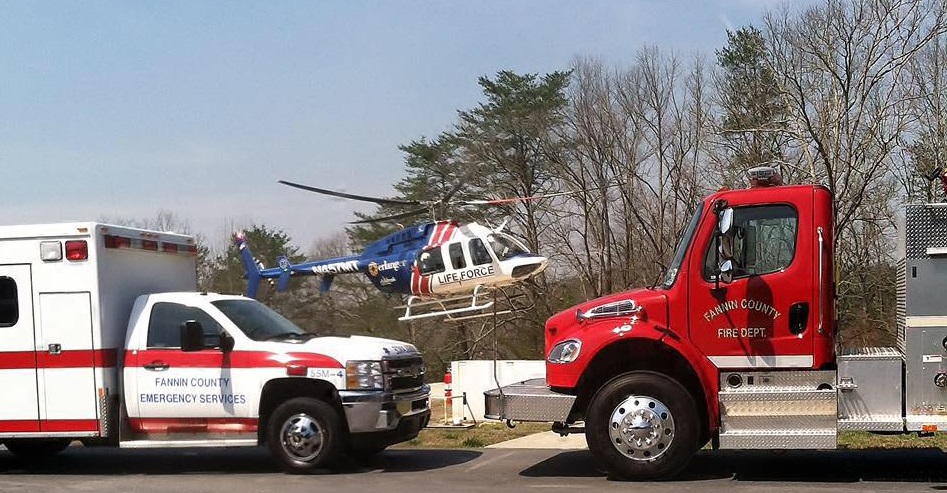 The latest updates come after the recent approval by the Board of Commissioners (BOC) to purchase a GPS locating system for 911 calls coming into Fannin County’s E-911 center.

EMA Director Robert Graham was present at the Feb. 27 BOC meeting to provide the commissioners and the public with the latest information regarding his department. A new ambulance arrived to Fannin County in 2017. Graham hopes this will help with increased demand.

The main topic of discussion was the progress of the new Fannin County E-911 center and fire station on Windy Ridge Road.

Graham informed the board that the structural completion of this project is about a third of the way through. After recently speaking with the contractor in charge of this undertaking, Graham said that crews are still on time to have the building complete in May or June of this year.

Commission Chairman Stan Helton also pointed out that the contractor was currently staying on budget with the project.

Post 2 Commissioner Larry Joe Sosebee questioned Graham as to how soon the new facility would be in use once the contractor’s work is complete.

“There will be a little bit of time to coordinate the moving of the 911 equipment and phones,” Graham said, explaining the difficult nature of the situation, “to make sure we do not put anybody without 911 service.”

Post 1 Commissioner Earl Johnson then questioned Graham as to what equipment would be moved and what equipment the county would need to purchase for the center.

Graham explained that all the electronic systems would be moved, citing the servers and phone system as examples, but that new furniture would need to be purchased.

Each dispatcher has five display monitors on their desk, and Graham explained that as the dispatcher’s equipment expands, so too does the need for a larger area. The new desks to be purchased would provide just that according to Graham and would allow room for extra equipment in the future.

These new desks are also equipped to be raised so that a dispatcher can stand while working. Dispatchers can work up to 12 hours a shift, and the new desks will allow them the ability to take a break from sitting without leaving their work area.

The new building will also have raised floors. Raised floors were a priority in the original design concept. The purpose of the raised floors is to allow infrastructure of the building to be easily accessible. This would save money in the future if need arises for upgrades or repairs.

New ambulances and fire trucks are also making their way into Fannin County. These new vehicles were approved in 2017.

One of the two ambulances approved in 2017 has already been located to Fannin County, and the other will arrive this month. The Fannin County Fire Department (FCFD) received one new fire truck in February and two additional fire trucks are expected to join the FCFD fleet in March of this year. One of three new fire engines slated to arrive in Fannin County in 2018.

Fire Station 1, the McCaysville Fire Station, and the Morganton Fire Station will each receive one of the new fire trucks. The trucks that the new engines will be replacing at these stations will be moved to other stations throughout the county.

“The reason we put the three trucks in those stations,” Graham described of the logistics of the new equipment, “those are three of our manned stations and they get quite a bit more use.”

Earl Johnson asked about the progress of finding a new location for the Mineral Bluff Fire Station, to which Graham replied that his department is looking but has yet to find a suitable area.

“The problem is if we don’t stay close to where that station is, it changes ISO (Insurance Service Office) ratings for some of the residents and that can affect their insurance considerably,” Graham told of the restrictions of finding a location for a new fire station in that area.

Johnson, understanding of the need to find land near to the existing station, would still like to see progress made in the search. He noted that the Mineral Bluff Fire Station should be next in line to be replaced once Fire Station 1 is complete.

After receiving a Homeland Security Grant in 2017 for the purchase of new equipment for command vehicles, Graham announced the EMA had once again been able to secure another grant.

“We did receive a trauma grant, or trauma equipment grant, for EMS through the Georgia Trauma Commission,” Graham told the board.

This grant will provide $7,500 to upgrade laptops in the county’s ambulances. This money was originally budgeted for the department through Special Purpose Local Option Sales Tax (SPLOST) funds but will no longer need to be taken from that account.

At the conclusion of the update, Post 1 Commissioner Earl Johnson asked Graham if his department had any other needs.