McCaysville, Ga. – Mayor Thomas Seabolt tried to bring to an end the reading of the monthly bills, as new councilmember Gilita Carter had done at previous meetings since taking office.

Carter had stated in a previous meeting: “I’ve been coming to a lot of meetings and it always comes up, about paying the bills. Well, I often sit there and wonder, what bills? Whose bills?”

Since taking office Carter has read each line item of the monthly bills aloud to the public, but Seabolt put a stop to this by asking for a motion before Carter could address the public. 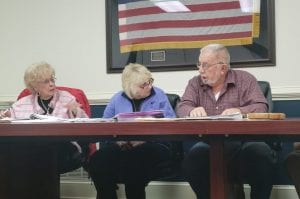 “I just don’t want to take the time to read everything because they’ve already been approved through payment in a sense,” Seabolt spoke to Carter of his reasoning behind not continuing to read the individual bills submitted by city departments.

“In the basis of transparency and in the fact that I stated before, that no one ever knew what the bills were, I will at least give the total for each department,” Carter said before reading each department’s total bills.

Mayor Seabolt responded to Carter’s reading of the totals by saying, “If they want a copy they can ask for public records.”

This sparked a short exchange between Carter and Seabolt, with Carter ending, “I won’t read them individually any more, but for transparency purposes people need to know what the city bills are. Transparency is what I’m going to stand for.”

Council-member Jason Woody proposed having a print out of detailed monthly bills available for citizens at the regular monthly meetings.

Ultimately, Carter voted no to paying the bills to show opposition in how the City Council is handling getting the information to the public.

The department totals for bills in the month of Feb. are as follows:

Later in the meeting Carter proposed that the City put in place a system for filing expenditure reports and receiving reimbursement. Her proposal includes basing the City’s millage rate reimbursement on Federal standards and having clear cut forms so that reimbursement would be organized and uniform.

Another topic of financial discussion came about when City Attorney Cortney Stuart pointed out during the meeting that no resolution actually exists that requires spending over $500 to come before the council for approval.

This topic and the topic of expenditure reports are expected to be discussed by council in a workshop meeting.