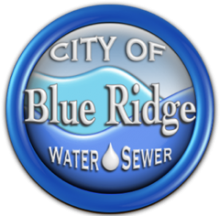 BLUE RIDGE, Ga. – Blue Ridge Mayor Donna Whitener and Utility Supervisor Becky Harkins sat down with officials from the county and the Fannin County Board of Education (FCBOE) as well as County and FCBOE Attorney Lynn Doss and engineers and contractors Tuesday, Dec. 19.

The meeting, as Harkins explained, was a pre-construction meeting that should have taken place before construction began on both the Fannin County Agriculture and Environmental Science Facility and the county’s public safety complex. The city requires a number of pre-construction items to be completed before a construction project is allowed to tap into city water lines. Harkins stated after former Director of Land Development Roy Parsons retired unexpectedly earlier in the year, the pre-construction meeting “fell off the grid (and) didn’t take place” before both entities began construction on their respective projects.

“Our agenda today is to get everybody the information they need in order move forward in a timely manner so that you can complete your projects on time and the lines are up to city development standards so that when you’re done, we can complete the process of taking those lines over, which was the desired attempt from the beginning,” Harkins said.

The most pressing issue on the checklist is receiving approval from the Georgia Environmental Protection Division (EPD) for the water main extension from Ada Street to Windy Ridge Road. According to Harkins, whenever the city or an independent developer extends a water line for which the city will eventually assume responsibility, the plans must be approved by the EPD as required by the state.

Part of the purpose of the meeting was to determine which entity – the school system or the county – would be responsible for submitting plans to EPD for approval.

Southern Architects and Engineers (A&E) is the engineering firm charged with the construction of the agriculture facility, and Michael Waldbillig, vice president of mechanical engineering for Southern A&E, explained the main extension from Ada will directly service the agriculture facility with the public safety complex line later tapping into the Ag building line at the first manhole after the extension from the existing city line.

Waldbillig inevitably agreed to send the plans for the extension to EPD since the immediate extension from the existing city line will be tied directly to the agriculture facility. Harkins also requested for the plans to be forwarded to the city for final review before Waldbillig sent the plans to EPD, which Waldbillig agreed to do.

Also, during the meeting, a meter vault located at the forthcoming public safety complex was discussed. It was revealed that an additional meter would need to be installed in the vault and the vault would have to be modified. According to EMA Director Graham, the vault, as originally designed, was not large enough to hold a fire line meter.

As far as any delays to the completion of the complex, Graham stated construction was still on schedule despite the need to modify the meter vault, and the projected completion date remains at the end of May 2018.

Regarding the continued construction of the school system’s agriculture facility, Gwatney and Shinpaugh both agreed that they did not anticipate any delays or additional costs to result from the city’s requirements concerning the water main extension and construction would continue as planned. Although the anticipated date of completion for the project is planned for sometime near the end of the school year, Shinpaugh did add that inclement weather in the coming months could be a factor in the construction process of the facility.