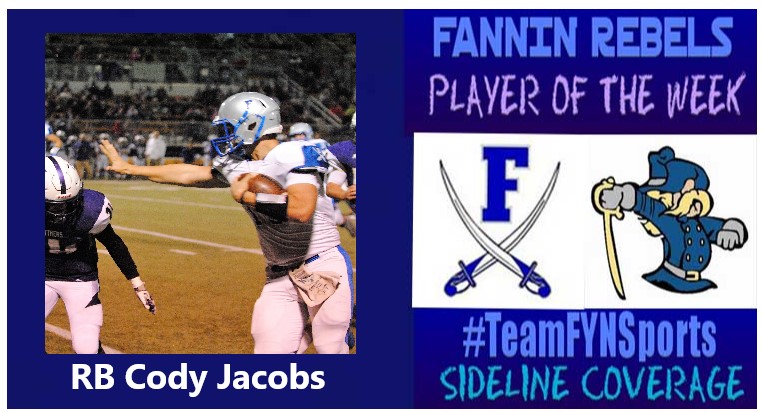 This week’s #TeamFYNSport Sportswriter Player of the Week for Fannin County High School is senior runningback Cody Jacobs.  Jacobs has carried the workload of the offense for the Rebels all season long, taking a majority of the carries in the Rebels’ running game and this week was no different as Fannin found success moving the sticks with a committed running attack.  He racked up a “bunch” of yards against the Panthers, but we really don’t have any idea how many yards he actually recorded because we typically don’t get offensive stats from Fannin until 10-12 days after the games are played.  Jacobs also took several snaps in the second quarter, as the Rebels moved personnel around and took advantage of direct-snap opportunities to throw the defense off-guard in some gutsy and entertaining play-calling.  Great job Cody Jacobs, and best wishes this Friday as Fannin hosts East Hall for senior night and the final football game of the season for the Rebels.