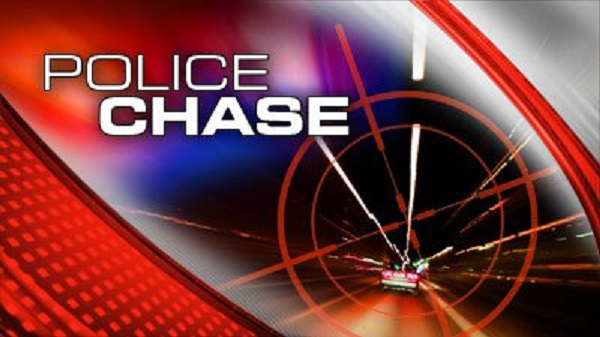 It’s unclear why Santiago was driving recklessly as no evidence of drugs or alcohol appeared at the scene. He was operating a vehicle with a suspended license, however.

Santiago, driving a tan Ford F150, picked up speed once Collogen and Higdon began their pursuit of the suspect.

To elude officers, Santiago plowed through his first of several intersections on West Tennessee Street. Collogen and

Higdon turned on their sirens and blue lights at this point before Santiago ran another light onto Ocoee St. in Copperhill and narrowly missed a White Jeep. He also disregarded the safety of pedestrians on the street and sidewalks.

Officers contacted Police Chief Michael Earley to obtain permission to continue pursuit across state and county lines as Santiago turned West onto Belltown Road. They pursued at speeds between 45 to 65 mph along Belltown and Airport Road.

Santiago failed to stop at any of the signs on Belltown, Airport, Pleasant Hill, and Wolfcreek Road. He continually weaved across lanes and drove down the center. Sometime during this point of the chase, officers moved in and obtained tag information to relay to dispatch.

Once reaching Hwy. 64 going toward Murphy, the suspect reached speeds of over 100 mph and periodically lost control of the vehicle before regaining control.

Cherokee County Sheriff’s Deputy Struchko and officer Dockery joined in the pursuit as Santiago blew through the Hwy. 19/129 intersection. Struchko took control of the chase at the Splash and Dash Car Wash, and Dockery deployed stop stick at the BB&T bank.

Struchko followed Santiago in the eastbound lane at speeds of 80 mph.

Santiago hit the stop sticks in front of BB&T. He lost control of the vehicle due to his two flat front tires. He veered into the Shell and Dunkin Donuts parking lot, just missing a red jeep in the Dunkin drive-thru.

After exiting his vehicle, Santiago attempted to flee on foot. Struchko drew his weapon and commanded Santiago to stop and lie on the ground. He obeyed, and McCaysville Officer Higdon handcuffed him at 8:51 p.m.

Cherokee County Sheriff’s Office took Santiago in for attempting to elude police, reckless driving, and driving with a suspended license. His bond is set at $5,000 and is awaiting a court date. 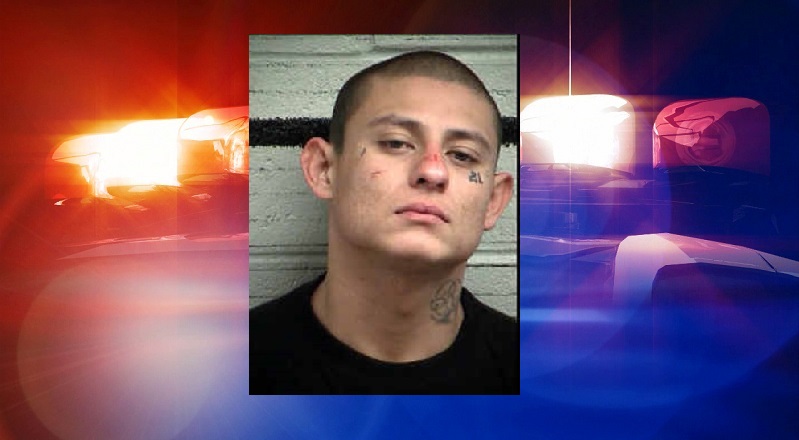 BLUE RIDGE, Ga. – A police chase ended with the detainment of the suspect involved. The Fannin County Sheriff’s Office made the arrest after becoming involved in the chase shortly after midnight on Wednesday, Jan. 10. Edmundo Ramirez was apprehended after a police chase in Fannin County.

Fannin County Sheriff’s Deputy Jared Wood noticed a green Nissan Pathfinder traveling south on Ga. 2 with a brake light out and failing to maintain its lane. Initially, the Pathfinder pulled over, coming to a stop, when Wood signaled for the driver to do so.

After pulling over, the vehicle then sped off to avoid the traffic stop. Several illegal traffic maneuvers later, the Pathfinder turned on to Old Hwy. 76 and proceeded toward downtown Blue Ridge.

Blue Ridge City Police Department was made aware of the situation and attempted to deploy spike strips at the Orvin Lance Connector and Old Hwy. 76.

The driver, identified as Edmundo Ramirez, eluded this attempt and continued closer to the downtown area. After turning off of East First Street, Ramirez was then observed running the stop sign at the intersection of East Main Street and Mountain Street.

Ramirez continued traveling down East Main Street going the wrong way on a One Way designated section and maintaining a speed of approximately 50 to 55 mph.

After reaching the end of East Main Street, the vehicle turned right onto Old Hwy. 76 in the direction of Ga. 2 once again. Ramirez lost control of the Pathfinder before reaching Ga. 2 and struck a natural rock formation, leading to a crash that would disable the vehicle in front of Bill Holt Chevrolet.

Upon wrecking the vehicle, Ramirez attempted to flee but quickly surrendered when Deputy Wood, conducting the scene as a felony traffic stop, pulled his handgun and demanded the suspect to halt. Ramirez then put his hands in the air and lay face down on the ground.

Ramirez, 25, of Buford, Georgia, was arrested and charged with multiple traffic misdemeanors. These misdemeanors include reckless driving, driving on the wrong side of the road, failure to stop at a stop sign, failure to obey traffic devices or police, failure to wear a seat belt, and failure to maintain lane.

Along with these traffic misdemeanors, Ramirez is being charged with driving on a suspended or revoked license and felony fleeing or attempting to elude a police officer.

Ramirez, who has a criminal history throughout the state of Georgia, was detained for similar charges in Buford. He currently has an outstanding criminal warrant in Hall County. A list of distinctive markings from Ramirez’s booking sheet

As indicated by the tattoos covering his body, Ramirez also has confirmed ties with the violent street and prison gang, the Barrio Aztecas.

The Barrio Aztecas formed in the late 1980s in El Paso, Texas, and quickly grew to become an international crime group with strong ties to the Juarez Cartel in Mexico. Known for drug trafficking and contract killing, the Barrio Aztecas are considered one of the most dangerous gangs in America.

Barrio Azteca Captain Eduardo Ravelo is currently on the the FBI’s Ten Most Wanted Fugitive list.

Fannin County Sheriff Dane Kirby was unable to comment on the detainee’s affiliations.

A source with the Appalachian Drug Task Force spoke with FetchYourNews about gang-related activity in north Georgia.

“North Georgia, I cannot confirm,” the source said speaking about Barrio Azteca infiltration in our area, “Atlanta, yes. There is a bit of every gang there.”

The source did confirm that there is known drug trafficking related to cartel activity in north Georgia, and added about why Ramirez might have been in Fannin County: “If he doesn’t live there, I would say it is likely that he was passing through for a specific reason.”

Ramirez made an initial appearance in court on Wednesday, Jan. 10. Magistrate Judge Brian Jones set bond at $12,500 for the charges in Fannin County.

Ramirez is currently being held at the Fannin County Jail. A hold has been placed on the detainee for transfer to Hall County, Georgia, where Ramirez has an outstanding criminal warrant. 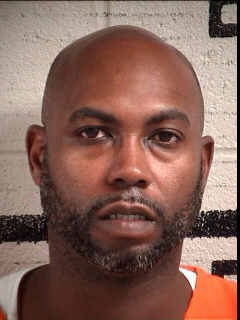 BLUE RIDGE, Ga. – A suspect was apprehended by the Fannin County Sheriff’s Office(FCSO) Friday morning following a robbery attempt at the BB&T bank on 3831 Appalachian Hwy. in Blue Ridge.

According to the booking report issued by the FCSO, Andrae Decarlos Foster, 39, of Powder Springs, Georgia, was arrested Friday, Dec. 15, at 9:47 a.m. by FCSD Deputy Brian Wingate shortly after the robbery attempt. Capt. R.A. Stuart, of the Blue Ridge Police Department (BRPD), reported that Foster entered the bank at approximately 9:30 a.m., and while a customer was in the process of making a cash transaction, Foster knocked the customer to the floor, took the money from the counter and ran from the building. Stuart stated Foster was unarmed and the customer did not suffer any injuries in the attack.

Minutes later, after authorities spotted a vehicle matching that of the suspect’s at a business just south of the BB&T bank, Foster again fled in the vehicle traveling south on Hwy. 515 with FCSD Investigator Scott Galloway and Deputy Wingate along with BRPD Lt. Gary Huffman pursuing him. Fannin County Sheriff Dane Kirby confirmed authorities pursued Foster south on Hwy. 515 into Gilmer County and apprehended the suspect near Appalachian Supply Company just north of East Ellijay in Gilmer county.

Stuart reported that the incident ended “peacefully,” and Foster is currently being held by the BRPD in the Fannin County Detention Center. “It was a great effort and a quick response from both the FCSD and BRPD in apprehending the suspect,” Stuart stated, adding that credit is also due to Capt. Justin Turner, of the FCSD, for his assistance with arrest.

At this time, charges against Foster are pending with a probation hold from Cherokee County, Georgia.

After the incident, BB&T closed temporarily but is now open and operating under normal capacity.

David R. White, BB&T Vice President of Corporate Communications, spoke briefly on the incident saying, “First and foremost, at BB&T we are committed to providing a safe and secure environment for our associates and where our clients can conduct their banking business. We cannot comment further on this situation as to do so might compromise the safety (and) the security of our clients and employees.” BLUE RIDGE, GA – Law Enforcement from three counties were involved in a chase today which ultimately ended with a suspect in custody. Shortly after 11:00 A.M., Towns County and Union County put out an APB (All Points Bulletin) for a stolen vehicle.

A detainee from Colwell Detention Center had been assigned work duty in Towns County, and had stolen a county employee’s vehicle from the courthouse. The suspect then fled the scene in the stolen vehicle.

The chase ended around noon, approximately half a mile south of West Fannin Elementary School on Highway 5, when the suspect lost control of the vehicle and crashed onto the shoulder of the road. Officers were able to apprehend him without further incident.

The suspect is now back in custody and being held at Colwell Detention Center.

FetchYourNews will bring you more updates as they become available.