NORTH GEORGIA – Both Gilmer and Fannin have received a new order entitled “Amended Third Order Extending Declaration of Judicial Emergency” closing and requiring deep cleaning for offices in the courthouses of both counties.

The order, sign by Superior Court Chief Judge Brenda Weaver of the Appalachian Judicial Circuit, states that a number of courthouse employees are displaying symptoms of COVID-19 and are awaiting testing results. Due to this the Chief Judge conferred with Board of Commissioner (BOC) Chairmen from each county and has declared the situation beyond the ability to continue with regular work.

The court has ordered that the counties deep clean and keep closed the following offices:

Just as with the previous Judicial Emergency Orders, Remote Videoconference hearings are being utilized and scheduled. The order states that all other provisions of the previous order are still in effect.

This all comes after the announcements of some of Gilmer and Fannin Elected Officials and Courts closing earlier today due to COVID-19 exposures. 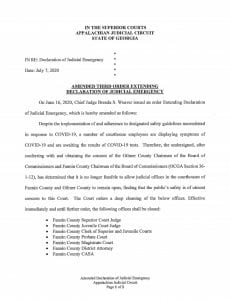 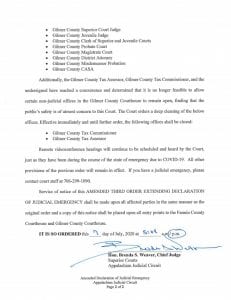