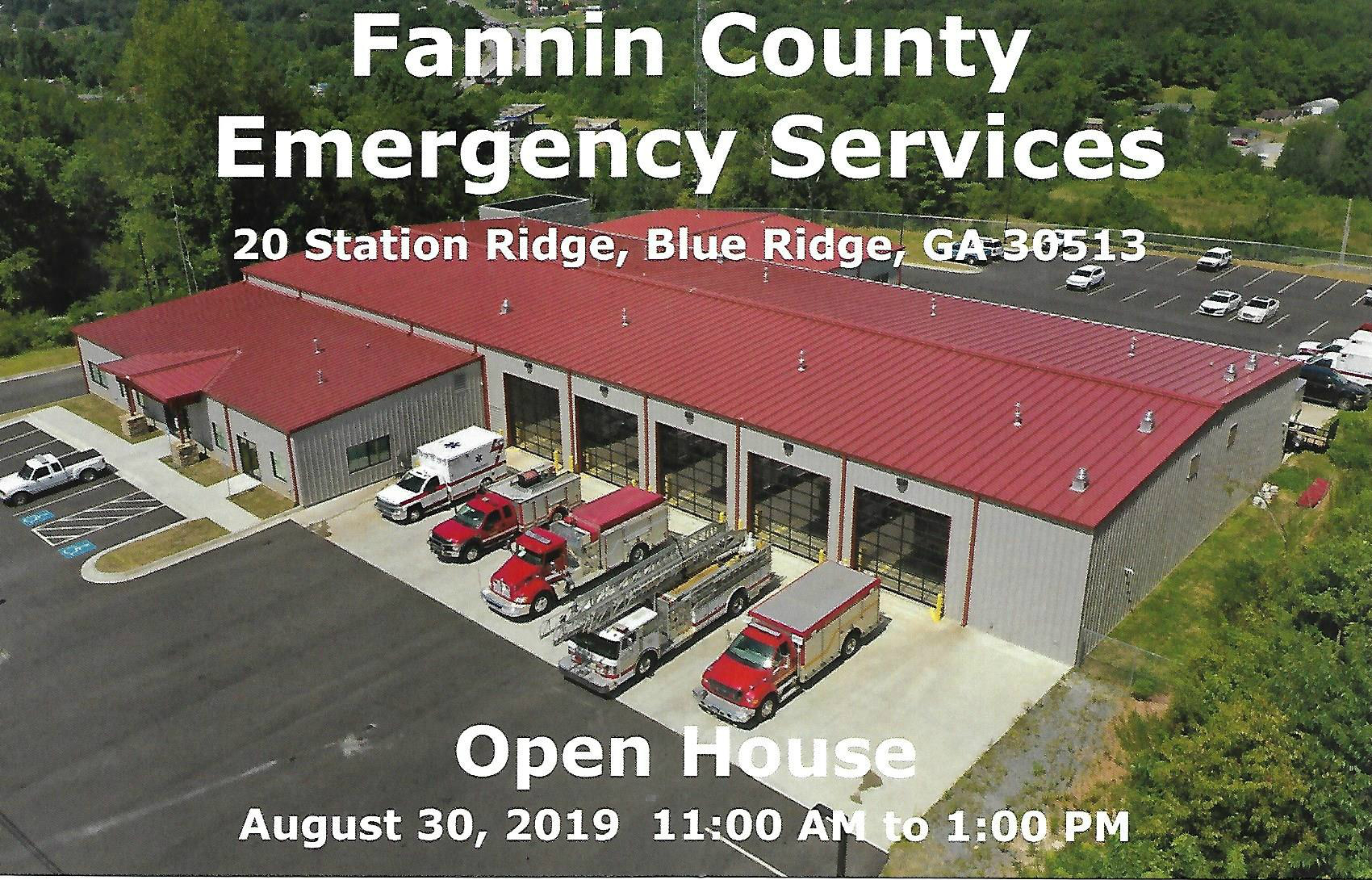 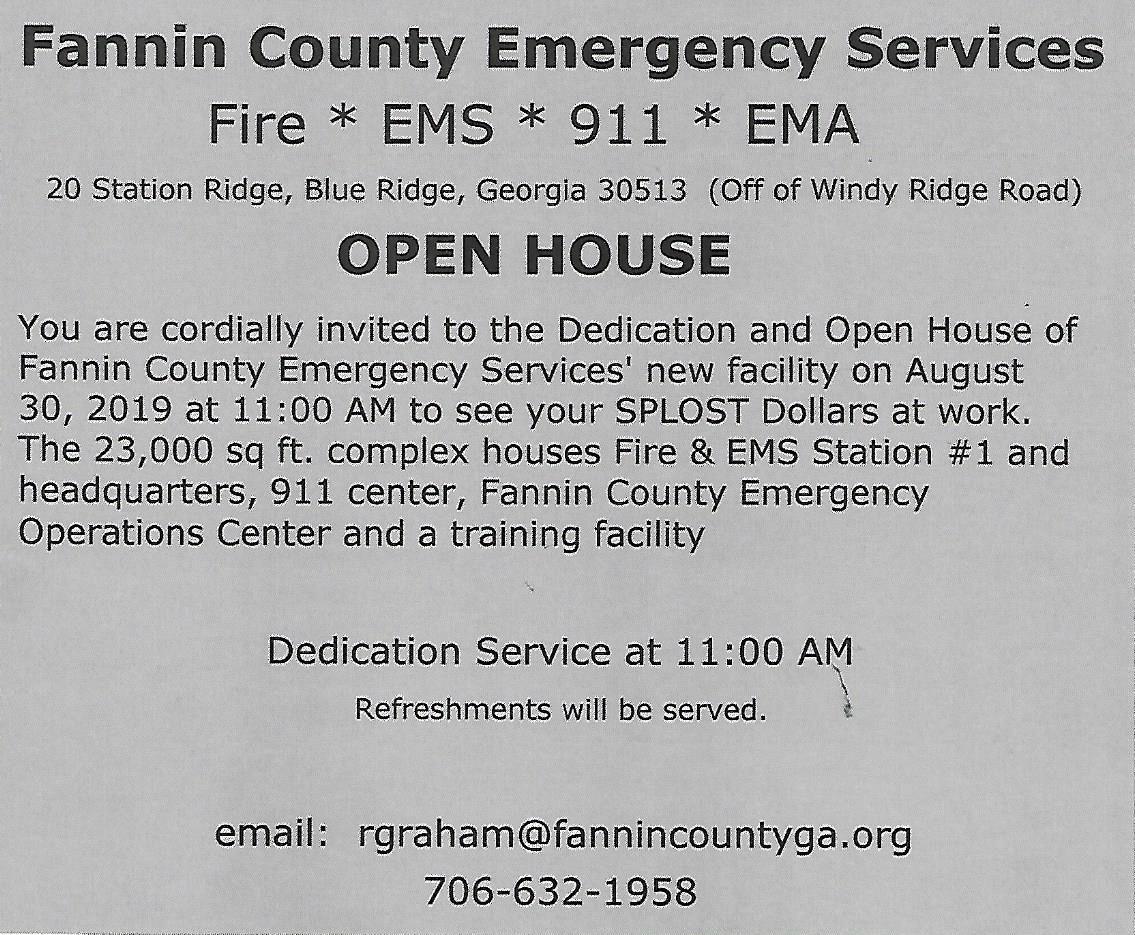 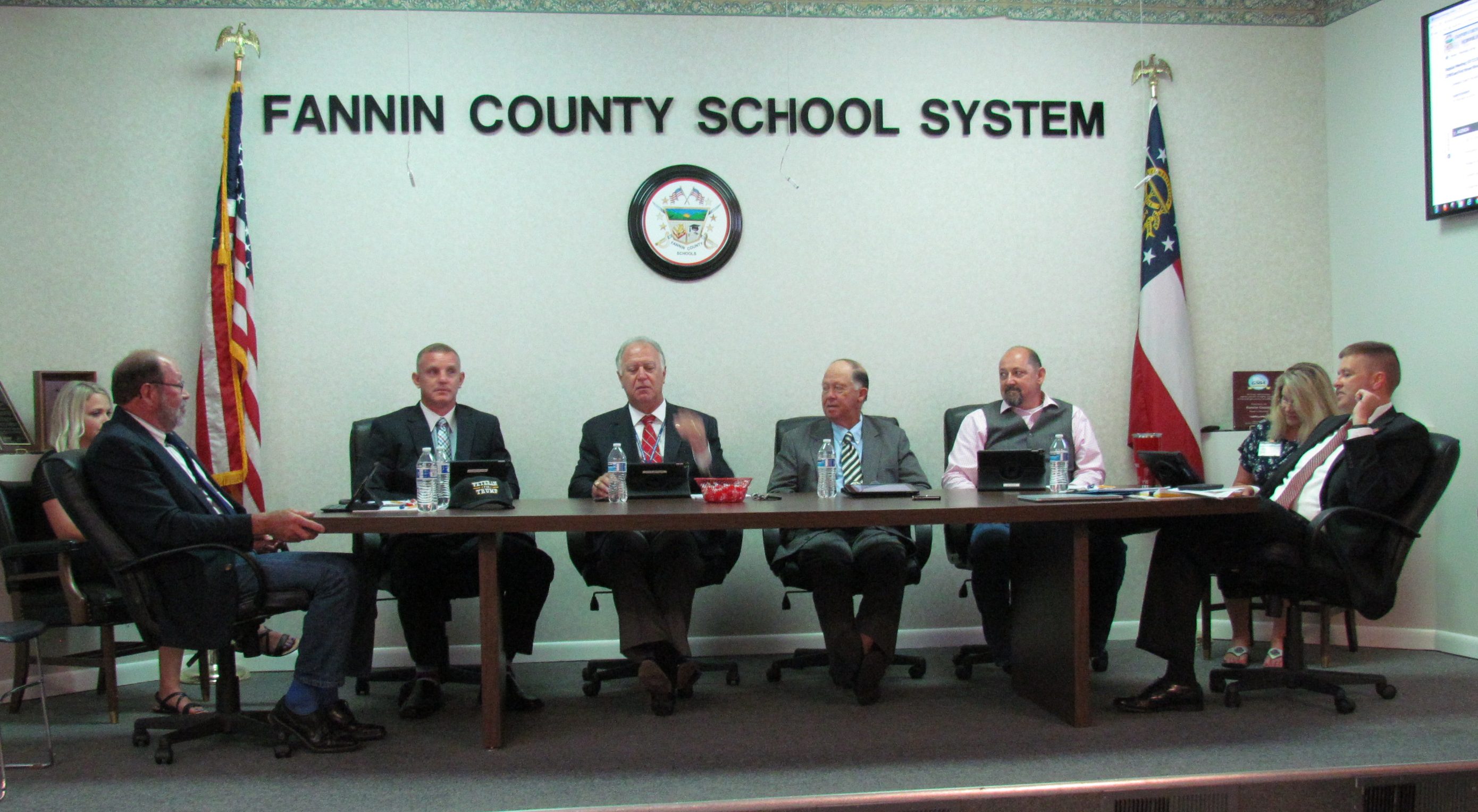 BLUE RIDGE, Ga. – The Fannin County Board of Education released their 2019-2020 Registration and Open House schedule during their meeting held on Thursday, July 11, 2019.

New Student Registration day is scheduled for Tuesday, July 12, 2019 from 8 am until 4 pm.
Currently enrolled students, as well as other new students, including upcoming Kindergartners, who have already registered for SY 19-20 do not need to attend.

Open House at Elementary Schools and Middle School will be on Tuesday, August 6, 2019 from 1 pm until 5 pm.

Fannin High Schools Open House for 9th grade students will be on Monday, August 5, 2019 from 5 pm until 7 pm.

Open House for Upperclassmen students will be on Tuesday, August 6, 2019 from 1 pm until 5 pm.

Any Fannin County High School student needing a parking permit needs to be at the PAC by 2 pm on Tuesday, August 6, 2019.

If you are planning to enroll your child in any Fannin County School for the 2019-2020 school year, the following documentation is needed:
Birth certificate, Current Immunization Record (Must be on a Georgia form), Eye/ear/dental examination record, Proof of custody (as noted in a divorce decree), Georgia Department of Public Health Form 3300, Social security card, and proof of residency (two documents, i.e., utility bill, paperwork, etc. verifying your 911 address; P.O. boxes are not proof of residency).

Also helpful in making your child’s transition smooth are copies of your child’s last report card and the withdrawal from the previous school.

To enroll a child in school, you must be the parent or legal guardian of the child.

Blue Ridge, Ga. – Volunteers and staff welcomed visitors to the Fannin County Animal Control (FCAC) facility on Saturday Oct. 27 to showcase the positive improvements being done and of course, the wonderful dogs being housed there. It was a crowded house as residents and visitors got to peek inside the FCAC facility and speak with the staff and volunteers about ways they can contribute to this community service.

This year the facility has seen upgrades in the likes of outdoor runs attached to the indoor kennel areas. The Fannin County Board of Commissioners approved funding for this project after speaking with FCAC Department Head John Drullinger on the impact this addition would have not only on staff safety but also for the quality of life of the animals.

“It makes such a difference for the dog’s quality of life,” Drullinger said explaining the changes he has witnessed since the outdoor runs were added. “They get more fresh air and it gives us a better ability for cleaning and sterilizing the inside part.”

Beyond improvements to the building itself, the recent movement of community volunteers taking action to help out in anyway that they can has had major impacts.

Volunteers come on a daily basis to walk dogs, clean kennels, and offer services in their areas of expertise. Some choose to take photos to help spread the word via social media about the adoptable animals at FCAC and others have even proposed using their artistic skills by offering to create a mural at the facility.

“It’s a great help. It’s huge,” Drullinger spoke of the volunteers,”We’re getting a lot of volunteers. Our group keeps growing.”

Patrice Noble Epps is one of the volunteers that loves spending her time working with the animals and crew of FCAC.

“If the animals didn’t have this place, they would be out on the streets,” Noble Epps said speaking of what motivates her to volunteer, “and ultimately they would die.”

A self-professed cleaning fanatic, Noble Epps says that while she enjoys working one on one with the dogs, she also loves to help with cleaning at the facility: “If you want something done, do it yourself and maybe people will follow.”

Noble Epps spoke of the ease in which she has been able to work with Fannin County staff to bring about changes and to focus on more improvements in the future: “I think you always have to have a good relationship with the people that you are going into their house.” Debbie Harbin, Co-owner of Treo Blue Ridge and regular volunteer, stopped by to introduce FCAC dogs to visitors at the open house.

The volunteers and staff have been working together to create more changes, both Drullinger and Noble Epps spoke of the recent addition of a sponsorship program.

This program accepts monetary donations from the public and these donations are being used to vet the dogs at the shelter. Vetting includes spay/neuter, heartworm testing, rabies vaccination, and microchipping.

During the open house several residents stepped up to donate to this program and sponsor the dogs.

Noble Epps would also like to see donations provide training for the shelter dogs being adopted.

“You could adopt the dog and then you go and you have a training class where you learn how to handle a shelter dog,” Noble Epps explained how the option of a training class would work and stressed that the dogs that have been there the longest would benefit the most.

Another improvement that seems to be on the horizon for the FCAC facility is the addition of an onsite outdoor play area for the shelter dogs. This area will be modeled similar to the dog park that is currently offered by the Humane Society of Blue Ridge, but be used by FCAC dogs only.

“It’s not guaranteed, but it’s in the works,” Drullinger spoke of the possible addition, “it’s on the drawing table and that’s the first step.”

Noble Epps summed up her feelings about volunteering with FCAC: “It’s what we have. Work with it. If you want to make it better, make it better.”
And making it better she has, as well as all the other volunteers who have donated their time and talents.

There is no denying the excitement and enthusiasm that is being brought to FCAC through the volunteers and the building upgrades. It is the hopes of all involved that this positive momentum will continue to increase well into the future. 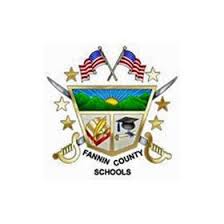 Schools in Fannin County will open on Friday, August 4.  Prior to this start date, Fannin County High School (FCHS) will hold two Open House Sessions.  The Upperclassmen Open House for 10th – 12th graders will follow the usual format on Thursday, August 3, from 1 to 5 p.m.   There will be a special Open House for incoming 9th Graders on Wednesday evening, August 2, from 5 to 7 p.m.    All 9th graders and parents are invited and encouraged to participate in this unique and customized opportunity.

For the Ninth Grade Open House on Wednesday, August 2, students and parents are asked to report to the FCHS PAC at 4:45to receive their fall class schedules from their homeroom teachers.   Students and parents will then participate in a “mock day” by attending each class for approximately 20 minutes.   Teachers will provide students with a syllabus and expectations for their class.

This 9th Grade Open House will provide our freshmen and their parents the opportunity to learn their way around the school and meet teachers on a more personal basis.  If a 9th grader is unable to attend on Tuesday evening, they, of course, can attend the Upperclassmen Open House on Thursday, August 3, from 1 to 5 p.m.  However, students will not participate in a “mock day” schedule on Thursday. As the School Year begins next week, the Fannin County School System will be hosting an open house on Wednesday, August 5th, from 1:00p – 5:00p.

Each School will be hosting it’s own open house at its location. Make sure you attend the open house as the first day of School starts the following day, August 6th.