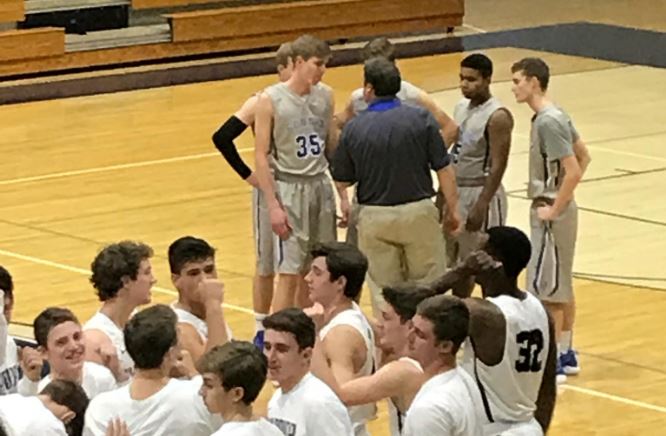 It was a fast-paced, but slow-scoring game early when the Fannin County Rebels varsity boys took the court at White County High School.  Fannin (1-8, 0-4) came into the game ready to lay it all on the line, chasing their second win of the season.  The Warriors (7-3, 1-0) were coming off a devastating one-point loss to rival Dawson County (55-54), ready to tip the scales of the win-loss column back in their favor.

A couple of baskets by Ryan Beavers (Fannin #35) and a free throw made by Nathaniel Garrison (Fannin #3) would be all the points the Rebels could put on the board in the first quarter, while White County’s Austin Rowland (#15) managed two baskets for four points; followed by a 2-pt shot by Austin Harris (#5), a 2-pt score by Jimmy King (#12),  and 1-of-4 free throws made by Cooper Turner (#23).

After one quarter of action, White County led Fannin County 9-5.

The war of attrition continued into the second quarter, as Fannin was only able to score six points via Beavers (4-pts) and Joe Satchell (#5) who was held to only two points in the first half.  White County scored another nine points, extending their lead (18-11), with Rowland continuing to make his presence felt on the court.  He scored two baskets and went 2-for-2 on free throw attempts in the second quarter, giving him 10 points of total offense in the half.  He’d finish the night with 20 points altogether, the leading overall scorer on the night.

In the third, the Warriors came alive offensively.  Rowland and Harris came alive with a couple of 3-pointers, and the team spread the ball around with four different players putting the rock through the hoop on their way to a 15-6 run, keeping the Rebels restricted to another tough quarter offensively.

The lead would prove too much for Fannin to overcome in the fourth, as White County won by a final score of 42-23, improving to 8-3 overall.

The Rebels scoring was led by Beavers with seven points, followed by Satchell with five, Chase Culpepper with three, Cohutta Hyde with two. Nathaniel Garrison and Payton Holt each scored a free throw in the contest.

White County now looks to enjoy some time off for the holidays before facing Adairsville, Ga on Dec 28th in the Blue Ridge Holiday Tournament.  Fannin County continues their pursuit of victory this Friday when they travel to Hayesville, NC.