BLUE RIDGE, Ga. – Projects continue to make progress as the Fannin County Water Authority (FCWA) expands its service area. Two such projects, Dry Branch Road and Blue Bird Road, have been in the works for several months now, and the board received updates on both. Kurt McCord, a project engineer with Carter & Sloope, Inc., informed the FCWA board that plans for the Dry Branch Road expansion are complete and that all approvals needed for the continuation of Blue Bird Road have been granted. McCord says that the Blue Bird Road project could possibly be complete in two months.

With this expansion comes the need to discuss rates for water customers. FCWA continues to grow and McCord presented the board with recommendations for pricing to its customers.

“We basically looked, really at the neighboring systems, kind of around us, ” McCord said, explaining how the pricing recommendations came about.
By comparing rates of the city of Blairsville, city of Blue Ridge (inside), city of Blue Ridge (outside), Ellijay-Gilmer County Water & Sewer, city of McCaysville, and the city of Morganton, Carter & Sloope came up with a set of prices for FCWA customers.

Fannin County poses a unique set of difficulties when pricing water rates in that many of the homes in the county  are second homes or rental properties, leading to less water use on average than that of full-time residents.

“I think it was wise at the time to adopt a higher base rate,” McCord explained of the proposed numbers, “because I think we have come to find out that they (part-time residents) may only be using 2,500 to 3,000 gallons a month.”

FCWA board member David Falls explained that the rates need to be enough to cover maintenance, employee’s salary, and any other costs associated with providing water to Fannin County residents.

Discussion arose about industry specific pricing. FCWA Vice Chairman Larry Chapman brought this issue to the board’s attention: “If we have chicken houses or something like that, we are going to have to look at a guaranteed minimum usage on something like that.”

Chapman cited that industries such as the chicken houses would likely use county water as a backup system.

Fannin County Attorney Lynn Doss explained that commercial rates could be broken up into different categories of industry and could also be examined on a case-by-case basis.

“You set the base lines. Then you have to negotiate certain things,” Doss described of providing water for commercial use on a case-by-case basis, “especially while you’re still in the mode of expanding your lines, your overall services.”

“Just set aside so that we would know that that is our building fund,” Kendall explained of the need. “Put them in a separate capital improvement account with the idea that in an emergency situation, we could use for operations, but it would require authority approval.”

The board unanimously voted to open a new account for impact fees, with the understanding that the board could approve to use these funds in another area if an emergency need arises.

The board approved the recommendations for water rates in Fannin County with the added impacts fees. Commercial pricing will mimic irrigation pricing.

The board will re-evaluate rates on an annual basis.

BLUE RIDGE, Ga. – The Fannin County Water Authority will see a new board member in March while other departments saw reappointments to boards during the Feb. 13 Fannin County Board of Commissioners (BOC) meeting.

Janie Bearden, a current member on the Board of Tax Assessors, saw reappointment to this board for another term.

Another reappointment came to the Fannin County Water Authority as Larry Chapman was unanimously approved to serve another term. Board of Commissioners get straight to business at February’s first meeting.

Angie Arp was also recommended by Sosebee for the Fannin County Water Authority board and was unanimously voted into this position. This three-year term will begin on March 1.

The BOC’s first monthly meeting opened with public commentary that brought about discussion from the board as well as from Fannin County Sheriff Dane Kirby.

Epworth resident Richard Sims discussed the ongoing littering problem throughout Fannin County: “The trash that’s littering the highways, I believe a large part of that is due to the home pick up services. These individuals are not securing garbage that they are picking up from homes and allowing it to literally blow off their trucks.”

Sims suggested possible solutions such as requiring these haulers to have hard top covers or begin strictly enforcing the county fines and issuing tickets for the maximum amount of $1,000.

Fannin County Commission Chairman Stan Helton took personal interest in this commentary, “I feel the board has been very assertive since day one on trying to attack this trash issue. That is something I don’t like to see myself.”

Helton believes that current county ordinances address this issue, and it is just a matter of finding an effective way to enforce the laws. Chief Land Development Officer Marie Woody is tasked with imposing these ordinances.

Unfortunately, Woody is only able to ticket these offenders if caught at current waste disposal facilities, and as Sheriff Dane Kirby pointed out, officers are unable to ticket offenders unless they personally witness the act.

“It’s a state law, in the state statute, that you can’t make traffic offenses based on what somebody else tells you,” Kirby explained.

Commissioners along with Kirby agreed to be more vigilant about this issue and pursue current county ordinances and fines in dealing with offenders.

Kirby, while not on the agenda, had an emergency expenditure arise that needed the board’s immediate approval. The dishwasher in the county jail recently quit operating, and upon inspection, it was recommended that the stove in the jail also be replaced.

Both appliances have been in use since the current jail opened several years ago.

“We don’t put items like that in our budget,” Kirby explained of the department’s predicament to the board. “We just don’t plan for things like that happening.”

The industrial dishwasher found would cost the county approximately $20,000 and the new stove would run around $2,500.

Helton motioned that the county replace both appliances for the jail, Post 1 Commissioner Earl Johnson seconded the motion, and all three commissioners voted in favor of the new appliances.

Commissioners re-entered into a contract with the Department of Family and Children Services (DFCS) regarding funding from the county.

No representatives from DFCS were present to discuss this funding.

Helton explained that this is an annual agreement that Fannin County has been involved in for years: “This is basically the budget we approve for 2018 – $50,558 – and we’re required each year to sign this showing that we are in fact going to fund them the amount that we say we will.” Morris updated the board on services provided through Family Connection during 2017. According to Morris, 105 people were served through the pantry. This number is actually down about 9 percent from 2016.

Morris also personally thanked the BOC for entering into opioid litigation: “Thank you so much for working on that opioid (litigation), because as you (Helton) know from being a volunteer at Family Connection, we see first hand, day to day, what happens with families who are in the opioid crisis and the poverty that results from that.”

Chief Appraiser Dawn Cochran from the Fannin County Tax Assessor’s Department presented the BOC with a number of bids for two new vehicles for her department.

Two used vehicles will be purchased from North Georgia Ford. The 2016 Ford Escapes will come with a price tag of $20,000 each.

After a long debate on the need for these new vehicles the board unanimously approved the purchase of the two used Ford Escapes. 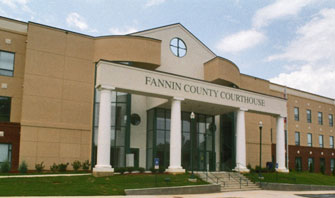 Following the call to order, Chairwoman of the Water Authority Anita Weaver took the opportunity to clarify last month’s vote on compensation for board members and chairpersons. She stated that they “talked to several different surrounding counties and communities to see how they do it,” and, ultimately, the decision was made to pay a flat rate each month versus reimbursement for expenses turned in. This flat rate would be $100.00 per month to each board member and $150.00 to the chair. Out of town expenses are the exception to this new payment plan and would be reimbursed after verification of expenses.

Board member Zach Ratcliff, Fannin County Public Works Director, opted out of receiving payments stating that he “is already on the payroll of the County” and felt it would be in conflict.

FCWA has been working with cities throughout the county to update and define service areas.  A map was presented of the final outlines for review. Members of the FCWA unanimously voted on approval of the new outlines.

Clearly defining the service area will allow different entities to have first right of refusal in new developments. This map will also allow for standards voted on by FCWA to be in place before offering service to any particular area.