BLUE RIDGE, Ga. – Animal activists and members of local animal rescue groups were present to have their voices heard again at the Nov. 28 Fannin County Board of Commissioners (BOC) meeting.

Taking the opportunity to speak during the public commentary portion of the meeting, residents addressed their concerns to the board. One resident spoke of the need for the inside of the animal control facility, located at 1001 Fannin Industrial Park in Blue Ridge, to be painted and updated. Jan Eaton addresses the board holding a crate tray that she received from FCAC.

Tri State Pet Rescue founder Jan Eaton spoke to the board regarding equipment currently used by Fannin County Animal Control (FCAC). Holding a tray used in the bottom of an animal crate, Eaton said, “With me tonight, I brought a tray that came out of the bottom of a crate that an animal was being housed in at Fannin Animal Control.”

The tray was visibly broken in two. “It is pretty sad that this is the best our county can do for the animals at animal control,” Eaton added.

Eaton went on to point out that at all of the meetings she has attended, department heads often speak to the board asking for specific needs for their department, and that she has yet to see FCAC Department Head John Drullinger do so.

Stating that the board spends “millions here and there,” Eaton said she thinks that the needs of FCAC are often overshadowed by other projects.

Earlier this year, the Board of Commissioners approved upgrades to the animal control facility. BOC Chairman Stan Helton and Post 2 Commissioner Larry Joe Sosebee voted to install guillotine doors to the existing kennels; Post 1 Commissioner Earl Johnson abstained from voting on this issue.

The approved improvements called for fourteen outdoor runs to the facility, as well as guillotine doors to allow the dogs to access these runs from their indoor kennels.

Helton stated at the time, “Not only will this improve living conditions for the dogs but will also allow animal control staff to safely access kennels for cleaning and feeding.”

FetchYourNews asked Eaton how she felt about the improvements that had been approved by the board for the animal control facility. Eaton replied, “They’re doing that. There is just a wealth of things that need to be done.”

“I really am asking post commissioners to take the initiative regarding any complaints about animal control,” Garner pled. “As I look back over the past eight years of the previous chairman, the most significant accomplishments that occurred were done by you two gentlemen.” Garner’s appeal did not go unnoticed. As the meeting came to an end, Sosebee spoke up about issues that were raised concerning animal control and addressed Eaton’s display of the broken crate tray.

“These trays you brought in … I’m an animal lover, I guess you could say as well,” Sosebee continued, turning to the other commissioners, “and guys I would like to find some way to buy some crates for animal control. If we could possibly do so, I don’t think it would be too much to ask.”

FCAC Department Head John Drullinger addressed the issue of the crate tray brought to the meeting by Eaton. He explained it is not uncommon for FCAC to be filled to capacity. Drullinger stated, “This is because we want to use euthanasia as only an ultimate last resort.”

When FCAC is filled beyond capacity, animals that are brought in are sometimes temporarily housed in individual crates instead of kennel runs.

In this case, Drullinger explained, “We were over capacity but had commitments from rescues to pull some of our dogs very soon. Rather than buy a new crate to house this dog for one day, we borrowed one. The crate was not county property.”

Drullinger added, “All of our (FCAC) crates are in good condition.”

BLUE RIDGE, Ga. – Animal activists and concerned citizens had their voices heard at the Nov. 14 Board of Commissioners meeting.

After a viral post on Facebook concerning two at-large German Shepherds ended in the dogs being falsely claimed at Fannin County Animal Control (FCAC), concerns over FCAC policy and procedure became a topic of discussion in the community. Commissioners were met with several residents ready to voice their concerns over animal control and over allegations made that Commission Chairman Stan Helton showed indifference to the situation.

First to speak in the Public Commentary portion of the meeting was Ralph Garner of Blue Ridge. Garner began by giving a list of items that he felt Helton had positively handled but quickly shifted into the issue of animal control stating, “His oversight of the ongoing problems with animal control is just not acceptable.”

Garner went on to defend Tri State Pet Rescue’s Founder Jan Eaton over allegations that Helton had made an insulting comment to her during a phone call.  Garner said that Helton’s insult “to our area’s premier companion dog rescuer cannot be overlooked. It needs to be called out and exposed.”

Jan Eaton herself spoke out about the indifference she felt she faced when trying to discuss issues regarding animal control. Eaton had asked to be put on the agenda to have more time allotted but had been turned down.

Eaton stated, “I’m researching to see if anybody has ever been put on the agenda that’s not a county employee, because if so, that is a definite first amendment violation, in my humble opinion.”

FetchYourNews reached out to Helton regarding the public commentary. Helton stated, “I have respect for all of the citizens of Fannin County. I still stand behind our employees at animal control, but I do take the time to look into each concern individually.”

Eaton also addressed the mistakes made in following policy at FCAC when it comes to owner reclaims. She stated that the current policy only requires that proof of rabies be brought for dogs to be released.

Jangling a set of rabies tags, Eaton stated, “They come in waving rabies tags and saying that is my dog. That doesn’t mean jack squat unless you call those rabies tags in and see if they match those dogs.”

A resident of McCaysville also spoke of policy at FCAC. He proposed that animal control make it standard to take a photocopy of the driver’s license of the person claiming a dog. He stated that it would be a way, if need arose, to track down the person who picked up the animal.

Fannin County Animal Control Department Head John Drullinger has looked into ways to improve the department’s current policy. A few of his suggested changes include:

Ask the person attempting to reclaim the pet if they can provide photographic evidence of ownership.

1. Make a copy of the driver’s license of the owner.
2. Photograph the vehicle the owner is picking up the pet in, regardless if it is the pet owner’s car or not, be sure to include an angle showing the license plate or include a separate photo of the license plate.

These revisions to the policy are not finalized and are still under review.

Also stepping up to try to provide a solution is the Humane Society of Blue Ridge (HSBR). A letter was sent out on behalf of HSBR describing their concern for recent events involving FCAC and the ongoing issue of stray and lost dogs in Fannin County.

The letter offered help stating, “After discussing the situation, our board came up with the suggestion that the FCAC officers microchip the dogs that are either reclaimed from, or adopted out of, the animal control facility. This would be a good way to decrease the number of unidentifiable lost dogs in Fannin County and would assist FCAC officers in returning pets to their owners.”

The letter went on to say, “Should the county and FCAC decide to initiate such a program, the HSBR would like to work with FCAC to help support a microchipping program for dogs adopted from, and those reclaimed from, the animal control facility.”

The first phase of the trial for Copper Basin Vet, Dr. William Mitchell took place on Thursday, October 10th. Support for the doctor was very prominent in the Fannin County Courthouse. END_OF_DOCUMENT_TOKEN_TO_BE_REPLACED

The citizens of Fannin County that attended the June 11, 2013 Board of Commissioners meeting left the meeting with a clouded mind thinking “Did that really just happen?” END_OF_DOCUMENT_TOKEN_TO_BE_REPLACED

Tri-State Pet Rescue made an official offer to take over operations of the county Animal Control facility this week. END_OF_DOCUMENT_TOKEN_TO_BE_REPLACED 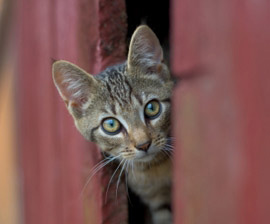 The City of Blue Ridge is seeking to curtail its feral cat problem. END_OF_DOCUMENT_TOKEN_TO_BE_REPLACED

Commission Chair Bill Simonds showed his frustration Tuesday night during the board of commissioners meeting following a series of complaints about the county’s handling of the Animal Control facility. END_OF_DOCUMENT_TOKEN_TO_BE_REPLACED