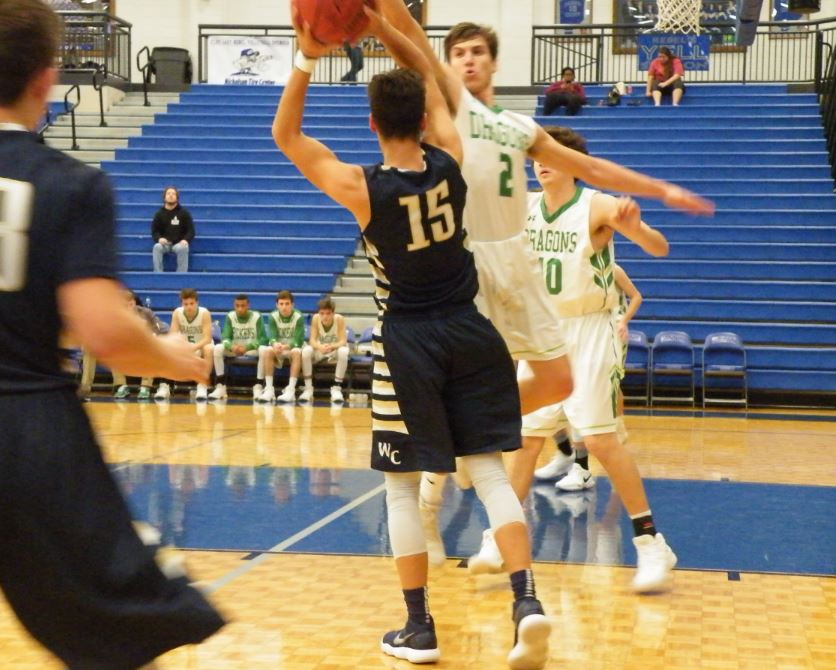 This past Friday at the Mountaintop Holiday Classic, the White County Warriors and the Pickens County Dragons traveled to Fannin County for their match up on day two of the tournament. Both teams were coming off of a loss from the first day of the tournament and ready to walk away with a win.

It was a high action and fast paced game from the start. The Dragons made the majority of their points from down low while the Warriors did most of their damage from driving the lane. Dragon post, Seth Bishop, led Pickens in scoring from the block with twenty-one points. Warrior guard, Austin Harris, led his team in scoring with twenty-four points due to his hustle. Warrior post, Austin Rowland, had the hustle on defense to make steals and contribute twelve points for his team. With the Warriors in the lead near the end of the third quarter, Pickens makes a buzzer beater shot to tie the game 17-17.

The hopes were high at the beginning of the second quarter. Both teams had the same chances of winning and were not giving up. The lead went from team to team and it became unpredictable on who would have it next. Warrior, Chandler Harris’s outside shooting came alive which put eleven points on the board for White County. Warriors, Reece Dockery and J. Ben Haynes, also had a good game above the key by each adding five points to White County’s score. The Warriors took a seven point lead over the Dragons at the end of the second quarter by making the score 29-22.

With Pickens down more than they had been the entire game, they were determined to make a come back. Both teams applied heavy defensive pressure on the other by putting a full court press into action. The press resulted in both teams getting steals and adding onto their score. At the end of the third quarter, White County doubled their lead over Pickens with a score of 47-33.

Pickens picked up the pace at the start of the fourth quarter. The Warriors start to put even more defensive pressure on the Dragons and draw fouls. Warrior, Jay Lepkoske, contributed one of his five points from the free throw line. The Warriors also started to have good looks inside which resulted in Kaleb Crane’s overall four points. Warriors, Daniel Rowland and Cooper Turner, followed the trend and each added four points onto White County’s score. However, the Warriors were not the only ones adding onto their score. The Dragons came back at the end of the fourth quarter with a score of 53-53, putting the game into overtime.

The intensity came alive at the beginning of the quarter. Both teams had four minutes to win the game. Pickens finally took the lead that they had been working for the whole game just to have the score tied once again at 63-63, putting the game into double overtime.

Four more minutes were put on the clock as both teams gave the game their all. The quarter was filled with hustle after loose balls, fouls from attempting to keep the other team from scoring, and heart. The back and forth of the game had everyone on their feet as they watched with anticipation. Although both teams played to the best of their ability, the White County Warriors had a 74-67 victory over the Pickens County Dragons.

The White County Warriors win puts their overall record at 9-4 while the Pickens County Dragons stand at 4-9. Catch the Warriors next game on January 2 at 5:45 as they travel to take on North Cobb Christian! 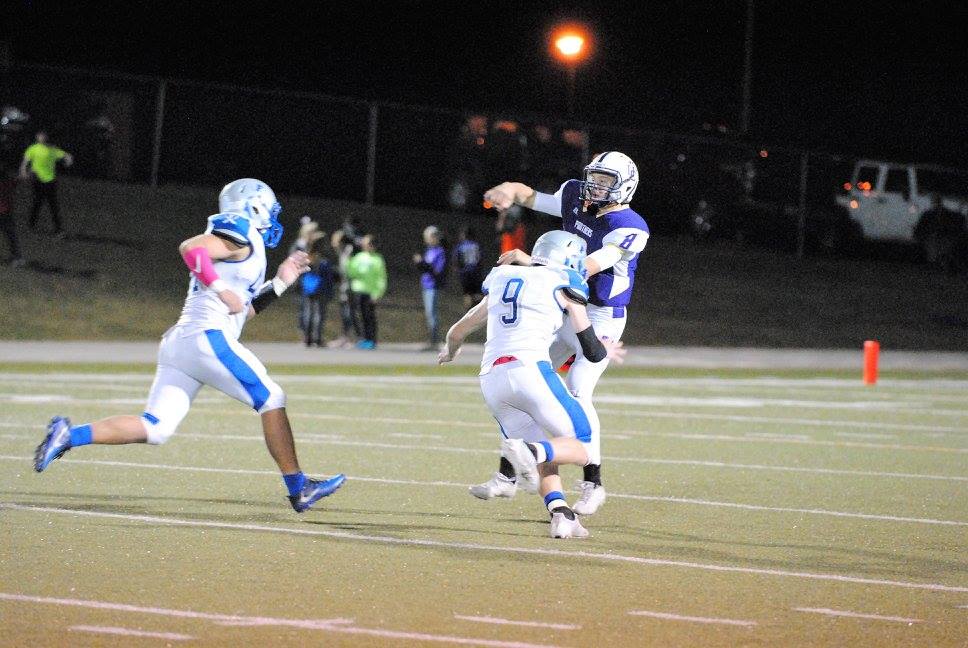 In the afternoon prior to Fannin County’s game against the Union County Panthers last Friday, the sun was shining if you looked to the northern end of the field you could see Old Glory gently waving behind a comfortable breeze. Fast-forward 45 minutes and winter had come, with fans bundled up so tight in their cold-weather gear it looked like a bunch of white-walkers from the tv series Game of Thrones were entering the stands.

You know what else was cold? Cole Wright, senior quarterback for the Union Panthers and college-commit for West Point.  Ice cold.

The Fannin Rebels’ defense had no answer for Wright, as he picked the secondary apart with precision-passing and took advantage of soft coverage when it presented itself, by eating up yardage with his feet. Union senior qb Cole Wright gets a pass away as the Rebels defense closes in. Photo by Jason Banks/TeamFYNSports.

Friday night’s game was the first game since the opening minute-and-a-half against Greater Atlanta Christian where we actually saw him play at 100% health. A serious foot injury sidelined him for the remainder of that loss, then restricted him in losses against Dawson, East Hall and North Hall.

The Rebels found themselves down 10-0 early, as their offense struggled to run the football and by the time senior quarterback Chandler Smith was given an opportunity to pass, the Union defense was ready for it and covered up his receivers. The Fannin coaches began rotating running backs to maximize use of their depth, and senior defensive back Jonah Henry was the first Rebel to carry the ball to paydirt for Fannin. The PAT by Sarah Sosebee was good (as always), and Fannin trailed 10-7.

It took Cole Wright less than 2-minutes to march back down the field and he carried the ball across the goal line himself for the next touchdown, Union regaining their 10-point lead, 17-7. The Fannin Rebels defense matches up with the Union offensive line in Friday night’s region game in Blairsville. Photo by Jason Banks/TeamFYNSports

Determined to run the football, Fannin employed a strategy we had not seen all season from the Rebels, putting two running backs in the backfield. Senior tailback Cody Jacobs took a couple of direct snaps and cut between the tackles, stunning the Panthers. Henry lined up in the tailback position and ran the ball as well. However, on a 4th-and-2 play in their own territory and only 3:44 remaining in the half, the defense keyed on the backs and tackled Jacobs behind the line of scrimmage for a turnover on downs.

Another two minutes passed, and another touchdown pass by Cole Wright put the Panthers up 24-7 with 1:22 remaining in the half. Unable to get down field with such a short period of time, Fannin would take the locker room trailing by 17.

The third quarter was a defensive battle, neither team willing to give ground to their opponents. On the first play of the 4th quarter, however, Wright hit Hemphill (#4) with a 60-yard pass to put the Panthers up 31-7.

The Rebels continued to play hard, despite trailing by 24 with less than 11 minutes remaining in the game, and eventually their hard work paid off with another touchdown for Fannin.

It appeared as though the final score would be 31-14, but with 38 seconds remaining senior Cole Dockery of the Union Panthers took the ball 62-yards for the final blow, resulting in the 37-14 final. FCHS kicker Sarah Sosebee smiles after kicking another perfect PAT. Sosebee has may 100% of her kicks this season. Photo by Jason Banks/TeamFYNSports.

Union County travels to take on the Lumpkin Indians this week, while Fannin County prepares for senior night as they host East Hall. East Hall suffered a shocking loss last week against North Hall, dropping them to fourth in Region 7 (AAA).

Kickoff is scheduled for 7:30pm.

Stats were not yet available for this game.