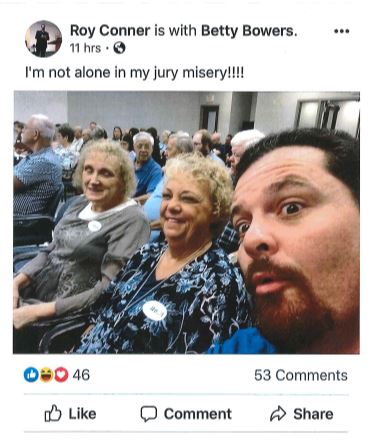 Blue Ridge, Ga – An Ill-timed selfie taken by a juror resulted in the dismissal of the entire jury pool for the week of August 5, 2019.

Fetch Your News can confirm that individuals who disregarded the sanctity of jury duty resulted in the cancellation of criminal court for August 5 through 9.

Jurors reported Monday morning for a high profile criminal case involving a minor that carried serious charges. While waiting in the jury room, Roy Conner took a selfie of himself and the majority jurors in the room. He even tagged a prospective juror when he posted it to Facebook. Additionally, at least three other jurors also commented about their jury experience online.

As a result, the identity of jurors became public knowledge. The selfie exposed jurors to outside influences.

Conner has since removed the picture from his Facebook.

The selfie received 50 likes and 55 comments before disappearing from social media. A courthouse employee, Robin Gazaway, commented on the photo asking Conner to visit her if he gets a break and to tell the judge that he believed “all people [were] guilty.” 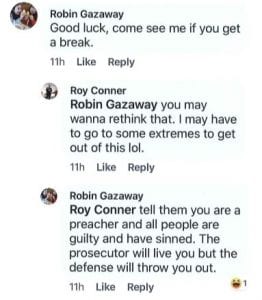 Gazaway gave Conner suggestions for getting out of jury duty.

The selfie and comments removed any chance of anonymity for the jury and opened jurors up to jury bias and persuasion.

Out of the 250 citizens summoned to serve for the week of August 5, 113 appeared on Monday, and 102 remained for duty. The county paid $7,100 in funds to the dismissed jurors and lost a week of criminal court.

Fannin County only receives six criminal court weeks a year. With the dismissal, the court will have to adjust trial dates for this case and all upcoming criminal cases.

The criminal case involving a minor was picking a jury for the first time, but the indictment occurred on November 2018.

Typically, Clerk of Court requires 25 to 30 days to assemble a jury, from list pulling to jurors appearing for court. At the courthouse, clerk and bailiffs inform jurors to silence or turn off their phones while waiting for selection.

In the future, summons might include a written statement that expressly prohibits taking photos or publicly sharing jury service on social media.

When reached for comment, Conner said, “If my Facebook post caused this, I am deeply sorry that I caused any trouble. The post was in jest, and I truly regret posting it. My sincerest apologies to the court, the county, and all involved. If I would’ve known a simple selfie done in jest would have caused this much trouble, I most assuredly would not have posted it.”

Blue Ridge, Ga. – Life and career skills are something that all youth need when moving into adulthood, and thanks to a new innovative program some of the youth of Fannin County will have an opportunity to have a jump start on these skills as they work their way through high school.

“A function of economic development is workforce and community development,” Gribble spoke of the new project and the inspiration she received from attending the Leadership Fannin program, “As a local to Fannin County I learned a lot about the community.”

Leadership Fannin is an annual program hosted by the Fannin County Chamber of Commerce in which community members are nominated to participate in. Each yearly group is exposed to an indepth look at Fannin County through site visits and speakers on a variety of topics.

Gribble’s youth program dubbed the Fannin Youth Initiative (FYI), will be based on the Leadership Fannin program but geared toward a younger audience. Executive Director Christie Gribble tells the Board of Commissioners about the new Fannin Youth Initiative.

Students at Fannin County High School, grades 10 and 11, are eligible to apply. In its inaugural year FYI had 13 applicants.

The program itself is a partnership between the Fannin County School System, the Chamber of Commerce, the Development Authority, and a network of volunteers.

“This is a free program for students. It’s paid for by sponsorships,” Gribble said of the no cost opportunity, “We had sponsorships from TVA (Tennessee Valley Authority) and Blue Ridge Mountain EMC this year.”

Students will be paired with a mentor for guidance and will get firsthand knowledge of economic development, entrepreneurship, small business, and tourism in our community.

According to Gribble one of the goals is to “help these students understand what you can do in the community if you do decide to stay and build a career here, or if you go off to college and want to come back. I want to show some success stories.”

Beyond being able to get out and meet with local workers, students will also be shown a variety of life skills needed to function as adults.

“We will show these students where you go to vote, jury duty, where you go to pay taxes, building permits,” Gribble spoke of students visiting the Fannin County Courthouse during the program. “These are things that not a lot of high school students know about.”

Participants will also get a firsthand look into state government with a trip to the Georgia State Capitol building.

Gribble noted that there will be school visits as well, and volunteers in the group will teach students about career building skills: “We will go into the school on a occasion and do some professional development such as communication skills, resume building, and interviewing skills.”

The program is set to begin Jan. 25 and run through April or May of this year. If all goes well with the inaugural “test run” of FYI, both the school and partnerships are open to expansion and possibly offering the program twice a year. 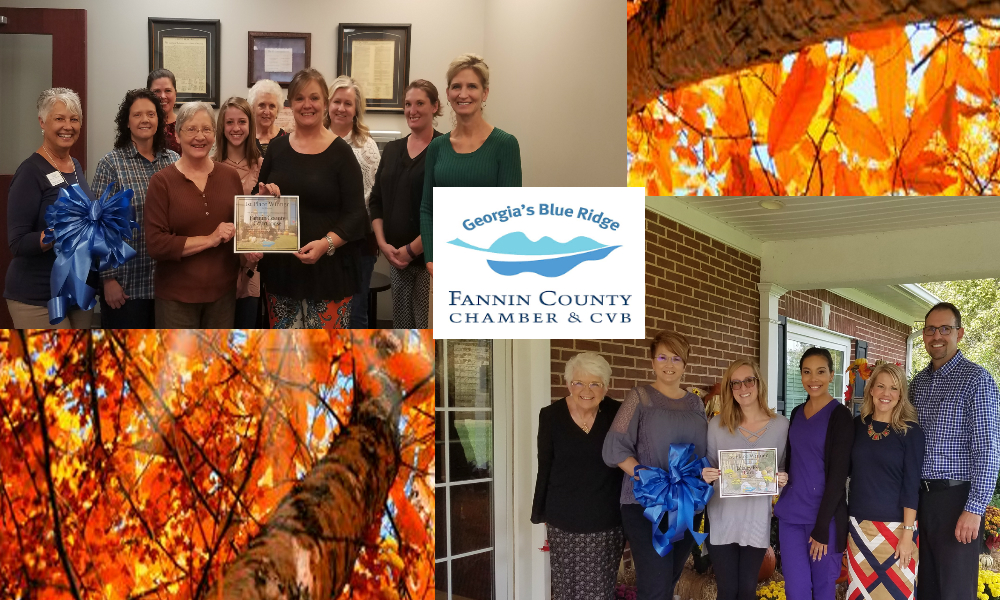 The 1st place winners in the 2018 Fall Decorating Contest were:

Congratulations to these two companies for the win! Enjoy the photos of their decorations below. Fannin County Courthouse Pictured above and below. 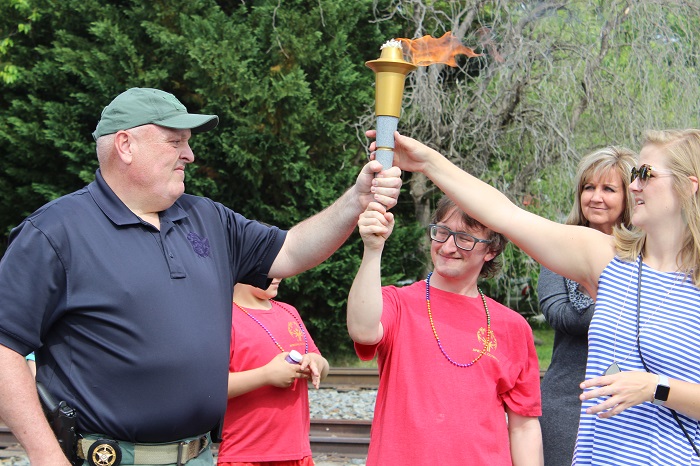 BLUE RIDGE, Ga. – Fannin County honored its special athletes today, and officially proclaimed both in the City of Blue Ridge and in Fannin County that the week of May 16, 2018 be Special Olympics Week. This year marks a very special anniversary for the olympics. Having begun in 1968, the Special Olympics celebrates its 50th year.

Blue Ridge Mayor Donna Whitener was present to kick off festivities as she announced that the City of Blue Ridge was officially acknowledging this week as Special Olympics Week and delivered a proclamation stating such from the city.

A lighting of the ceremonial torch set activities in motion, and the athletes were cheered on as they made their way up East Main Street to the Fannin County Courthouse participating in the Fannin County Torch Relay. The celebration continued at the courthouse where the procession was greeted by Fannin County Chairman Stan Helton. Helton announced to the crowd that Fannin County too would like to recognize this week as Special Olympics Week and signed an official proclamation as well.

The Special Olympics will take place tomorrow, May 16, at Fannin County Middle School (FCMS). The opening ceremony will be at 9 a.m. in the FCMS gym. 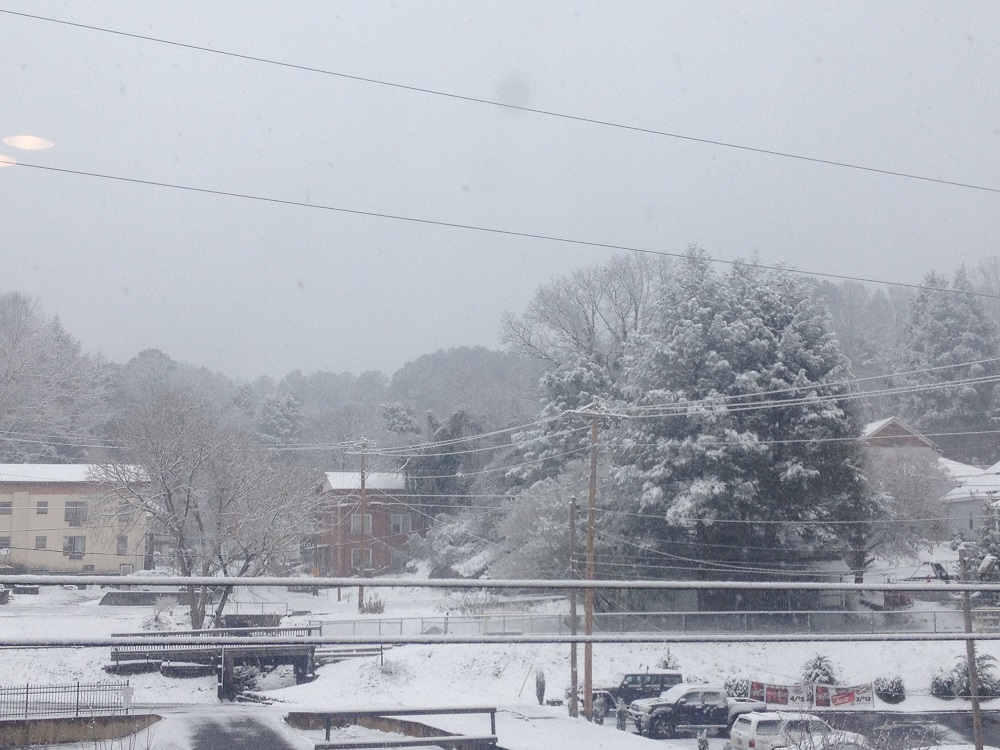 BLUE RIDGE, Ga. – According to the official website for the Fannin County School System, all county schools are closed today due to inclement weather that began in the early morning hours Friday, Dec. 8, and is expected to continue throughout the day and evening.

Also, the Fannin County Tax Commissioners office will close early Friday at noon, followed by the the closing of the entire Fannin County Courthouse at 3 p.m.

The National Weather Service has issued a Winter Storm Warning for Fannin and surrounding counties until 7 a.m. Saturday. 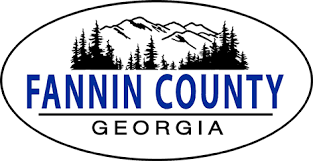 Do not misconstrue this as a question and answer session with the board.

Limit 3 minutes per person. Please state name and address before comments. All comments should be addressed to the Chairman.

The Fannin County Board of Commissioners meetings are held every second and fourth Tuesday at 6:00 p.m. in the Jury Assembly Room – Third Floor of the Fannin County Courthouse.

This agenda has been approved by the Chairman and is subject to change at his discretion.  If you have questions or concerns, contact Chairman Helton at shelton@fannincountyga.org

The first phase of the trial for Copper Basin Vet, Dr. William Mitchell took place on Thursday, October 10th. Support for the doctor was very prominent in the Fannin County Courthouse. END_OF_DOCUMENT_TOKEN_TO_BE_REPLACED

During Tuesday’s BOC meeting, Commission Chairman Bill Simonds announced that EMA Director Lonnie Oliver will retire from his position with the county. END_OF_DOCUMENT_TOKEN_TO_BE_REPLACED