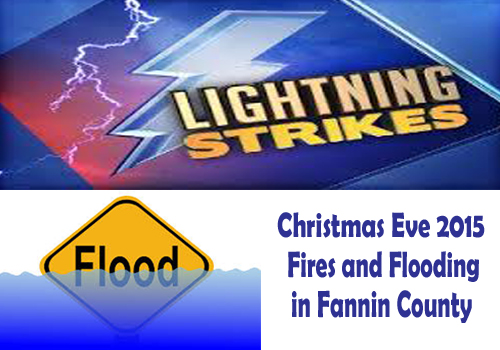 Heavy rains and thunderstorms created flooding in much of North Georgia on Christmas Eve 2015.  FetchYourNews.com talked with Fannin County Fire Chief Larry Thomas who told us he had been dealing with fire and floods today.  Early this morning the Fannin County Fire Department responded to a lightning fire on Scenic Mountain Road off of Dial.  The lightning hit a gas line which caused a fire in the furnace in the basement.  Thomas explained it was a forced entry situation where once inside fire fighters were able to put out the fire with fire extinguishers. 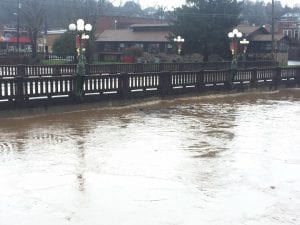 While the firefighters were inside clearing the smoke and ensuring all was safe the water outside was rising.  Chief Thomas said by the time they were finished and preparing to leave they realized the water had risen 2 1/2 to 3 feet deep.  All of the trucks were large enough to get out except the Chief’s and he will have to wait until the water recedes to remove his vehicle.

Weeks Creek Rd
Silver Fox Trail
Mountain Rivers Rd
Lowery Rd near Cutcane
Dial Rd
Were all closed at last report.
In addition, the bridge on Hwy 5 in McCaysville is closed until the state bridge inspector checks it.
There may be water still standing in other areas as well.  Drivers should use caution when traveling tonight and if we get more rain tonight, these areas may flood more/again.

Thomas encourages citizens to please not enter any areas with water and to use the “Turn around, Don’t drown” rule when you cannot tell how deep the water may be.  Fannin has been declared a State of Emergency due to the flooding.  North Georgia has several areas affected by the flooding on Christmas Eve.  See earlier coverage:  Heavy Rains Cause Flooding in North Georgia Christmas Eve