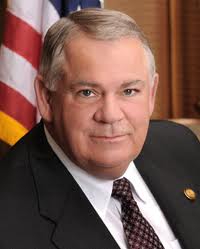 Blue Ridge, Georgia—House Speaker David Ralston (R-Blue Ridge) announced Saturday, March 10 at the Fannin County Courthouse that he will seek re-election to the Georgia House of Representatives. Ralston represents District 7 in the State House, which includes Fannin, Gilmer and the western portion of Dawson County.

“The past three years have been exciting, challenging and humbling,” Ralston said in his announcement. “When I was first elected Speaker, we faced not only our darkest economic hour as a state since the Great Depression, but our state government was also rocked by feuding, bickering and gridlock.”

“Today, we can look back and say that we have faced down our challenges by cutting spending, resisting tax increases, promoting forward–looking policies on transportation and water supply issues, initiating tax and regulatory reform to make Georgia more competitive in job growth, and implementing strict ethics reform laws to clean-up our Capitol and bring more openness to your state government,”

Ralston was elected to the House in 2002. In January 2010, he was elected the 73rd House Speaker in Georgia’s history. He previously served in the Georgia State Senate for six years and was the Republican nominee for Georgia Attorney General in 1998.

A native of Ellijay, Ralston is a graduate of Gilmer High School, North Georgia College and State University and the University of Georgia School of Law. He has practiced law in Blue Ridge since 1983.

Ralston will seek re-election as Speaker of the House after the November general election this year.

“During my time as House Speaker, I have tried my best to reflect the conservative values we hold in common,” Ralston said. “I may not win the favor of the special interests or the liberal media in Atlanta, but I hold fast to my roots in these mountains and the friends who have supported and stood by me.”

“I am excited about moving forward on providing relief to taxpayers and building a Georgia that is creating jobs and growing small businesses,”

“I believe strongly that our brightest days as a state are still ahead,” Ralston declared. “I respectfully ask the citizens of this district for their vote and support in the July 31 Republican Primary.