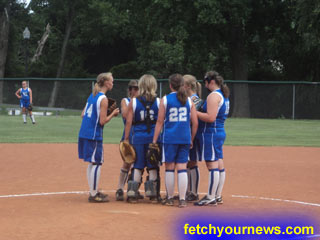 The Fannin County Middle School Lady Rebels Softball team fell 8-0 to the Lady Bobcats of Clear Creek Middle School. The Lady Rebels were done in by the Lady Bobcats’ aggressive base running and timely hitting.The Lady Rebels’ night began with some promise as, lead off batter, Haylee Bearden reached first on a walk. Kiersten Seagle followed Bearden’s walk with a single. Allie Barfield’s base hit, immediately afterward, was nullified when Bearden was thrown out at home plate, and Barfield was thrown out after an unsuccessful attempt at extra bases. Ashley Rhodes, hit a single to put women on first and third, but the inning came to a close when Kakyra DeGrie struck out.

The Lady Rebels were retired by Baylee Whimpey, starting pitcher for the Lady Bobcats, with three straight strike outs in the second inning. The Lady Bobcats conversely, scored three runs in the bottom of the second, by channeling their inner Catwoman with a plethora of stolen bases. Catcher, Ashley Rhodes, Up to Bat
(Photo by LT Melton)

The third inning began with Katelyn Waters striking out. Immediately afterwards, Kiersten Seagle hit a double deep to center that was a hair’s breath from being an RBI, but the Lady Bobcat’s defense showed its claws when Bearden was thrown out at home. The Lady Rebels scoring threat came to a close for the inning when Allie Barfield ground out.

The bottom of the third began with Chancy Davis walking and immediately stealing second. However, the next three batters went down, leaving Davis stranded on second.

The top of the fourth saw Ashley Rhodes lead off with a single for the Lady Rebels. Following a strike out, Rhodes was thrown out when Whitney Campbell hit into what should have been a sure double play; however, Campbell reached first because of an errant throw to the first basewoman. A courtesy runner was brought in for Campbell, and thrown out trying to steal second, effectively ending the scoring chance for the Lady Rebels in the fourth.

The wheels came off for the Lady Rebels in the bottom of fourth, when, following a ground out, Emily Cantrell reached third base on a single, because of a multitude of errors by the Lady Rebels’ defense Meagan Dotson’s RBI single made the score 4-0. Dotson proceeded to get her Bernie Madoff on when she stole second, third, and then home to make the score 5-0. Following Beverly Warfield’s walk, Kaylee Deyton’s RBI single made the score 6-0. Deyton became a copy cat of Dotson, when she stole second and third, after the throw to second went high, and then stole home on an errant pitch. With the score 7-0, the inning came to an end with a fly out to the short stop. Katelyn Waters up to Bat
(Photo by LT Melton)

Neither team scored in the fifth inning. The game was called when Dotson’s RBI double scored, Emily Cantrell to make the score 8-0. The Lady Rebels’ next game will be Friday August 12th at Jasper Middle School.