Blue Ridge, Ga. – Shortly after midnight, in the early morning hours of Dec. 4 gunshots rang out at a home on Elrod Lane in Morganton, Ga. The shots resulted in the murder of 33 year old Justin McKinney and a critically wounded second victim, Anna Franklin.

Not many facts have been released regarding the McKinney murder case, but 4 juveniles have been arrested and charged with the crime.

Surprise came to Fannin County as the arrests were announced. Fifteen year old Blake Dickey (AKA Blake Dye), 15 year old Hunter Hill, 15 year old Dalton Manuel and 16 year old Lakota Cloer were detained. Citizens were shocked to learn that such crime would come from a group of teens.

Franklin sat down with FetchYourNews to discuss the events that took place that night and to dispel rumors surrounding the possible motive of the boys.

Franklin and McKinney were about to go to bed when the couple heard loud banging coming from their front door. According to Franklin, McKinney answered the door to find Blake Dickey and Hunter Hill asking to come in.

According to Franklin, Dickey and Hill had told the couple that they “had to jump out of someone’s car and run but they didn’t say who or why”.

“I would have never expected them two to do anything like that,” Franklin said about the boys. “Hunter and Blake always seemed like calm, good kids to me, and it does not make sense.”

Franklin acknowledged that the couple knew Dickey and Hill, and that McKinney had been friends with the boys’ fathers for years.

“All the Hill brothers used to come over and help Justin with his animals. He had a lot of animals and they would help him feed them and clean their cages and everything,” Franklin said recalling the relationship with the Hill family and added about Dickey, “Blake had always been real quiet.”

Once the boys entered the home, Franklin says that their demeanor became calm, not as it had been just moments prior when the boys where found banging on the door.

For the next fifteen minutes the two boys and McKinney spoke. Franklin says she sat on a nearby loveseat but didn’t hear what the three were talking about because she was distracted by her phone.

“There was no argument or nothing,” Franklin spoke of the interaction, “If somebody had raised their voice I would have looked up and payed attention.”

McKinney got up at some point to tend the fire, and that is when Franklin heard the first gun shot. She thought at first it was a loud crackle in the fire, but as the second shot came she quickly realized it was gunfire.

“After the second shot I looked over towards him (McKinney) and he wasn’t where he was,” Franklin continued, “I didn’t know if they were going to shoot at me or not. I just covered my face because I was scared.”

Two more shots were fired at this point, and one of those shots struck Franklin. The bullet went through Franklin’s arm and entered her face, shattering her jaw and lodging in her neck.

Franklin spoke of the bullet that is unable to be removed from her neck, “What they told me when I was at the hospital, it will cause more damage if they do it.” The wound has caused Franklin to lose feeling in the bottom half of her face.

After being shot Franklin said that she heard Hill yell Dickey’s name and the two boys fled.

“I didn’t see who pulled the trigger. I didn’t have time to look,” Franklin didn’t lower her arm until the boys were gone. “I don’t know if they thought I was ok or not, but they aimed at both of our heads.”

After Franklin uncovered her face she says she jumped up and shut the front door and locked it. She then turned her attention to McKinney.

“Then I ran to Justin. His eyes were open but I knew he didn’t see me. I tried to stop the blood with my clothes but couldn’t. It was pooling around my feet,” Franklin became emotional as she spoke of McKinney. “I had to leave him to go call them (911) on the house phone. My mind was not accepting that he was gone.” 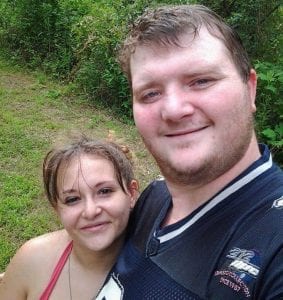 Franklin said that she never saw the other two boys (Cloer and Manuel) that have been charged in the case nor did she see a vehicle at her home.
Rumors have spread surrounding this case regarding a motive that would lead four teens to conspire to murder. Drugs have been a common theme among these rumors. Franklin wanted to set the record straight.

Hearsay has also come about that McKinney sold Hill’s older brother drugs that had an adverse effect on the young man and that the murder was revenge. Franklin said on this speculation, “That’s ridiculous. His brother might have had something, but it was not from Justin.”

Franklin acknowledged that it is possible that the boys had planned on robbing McKinney of his marijuana that night, but says that she didn’t feel like they were there long enough to have taken anything and said of her own speculation of a possible motive, “That’s something I can’t figure out.”

Franklin, who had been with McKinney for the last six years, wants people to know of the man who was murdered, “He was everything to me. He made sure that I was ok. He had a very good heart.”

“What happened will be forever burned in my mind,” Franklin spoke with tear filled eyes as she recounted the events that unfolded in the early morning hours of Dec. 4.