BLUE RIDGE, Ga. – After several discussions the Fannin County Board of Commissioners (BOC) approved a plan for the county to finish funding the new fire station and E-911 center located on Windy Ridge Road.

The BOC, under former county Chairman Bill Simmonds, had agreed to a budget of $2.5 million to complete this project, but bids came in higher than projected.

Helton explained at the Feb. 27 BOC meeting the need for financing the remaining balance of the project, “We really didn’t know until we got the bids last year, there were two of them, and we didn’t open those bids, I believe, until the last meeting in May, and the low bid with all the factors in there was 3 million dollars. Almost exactly that number.”

“It’s not that we spent more money. We just did a contract that was a little bit more money than they had originally estimated it was going to cost,” Fannin County Finance Director Robin Gazaway further clarified.

Discussions at the Feb. meeting brought up the possibility of borrowing the needed funds through a bond company, to which Post 1 Commissioner Earl Johnson firmly stated that he was against this option.

Looking into other avenues to pursue for the funding, Gazaway presented the BOC with the possibility of borrowing funds from the county’s general fund and using county CDs (Certificate of Deposit).

This option would allow the county to essentially have an interest free advance. By going this route, Gazaway explained that it would save the county roughly $100,000 in interest and an additional $30,000 in fees.

At the April 10 BOC meeting the board approved this option for financing with a plan on how and when the county would reimburse the general fund.

“We’re looking at over one million,” Post 2 Commissioner Larry Joe Sosebee clarified the total amount needed for the project’s completion. 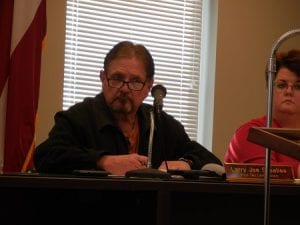 Gazaway explained cashing in the county’s CDs, “We’re not paying those back, we’re just going to use those, and then the rest of the money ($650,000) is to be advanced.”

To pay back the $650,000 borrowed from the general fund the BOC decided to make the monthly payments by taking half of the payment amount from SPLOST (special-purpose local-option sales tax) and the other half from an extra 10 percent portion of the county’s Hotel/Motel Tax allocated directly to the county this year.

Approximated repayment of the advance would take the county 27 months.

Johnson thought this would be this best plan of action on paying the advance back, stating of pulling from two funds, “I don’t think we need to exhaust either one of these funds in my opinion.”

“This is one of the things I talked about with the Hotel/Motel Tax,” Johnson, a long time proponent of transparency in regards to the spending of these funds, stated, “it’s something that each and every person can go and touch that building and know where it went.”

“I think this is good example of something to use it on,” Johnson added.

Helton agreed with his fellow commissioner: “I think this is about the most appropriate use that we could use for these additional funds.”

Helton motioned to accept an advance from the county for this project, with the stipulations that it would be repaid in 27 months using funds from SPLOST and the Hotel/Motel Tax. Johnson seconded the motions and the board approved this move unanimously.