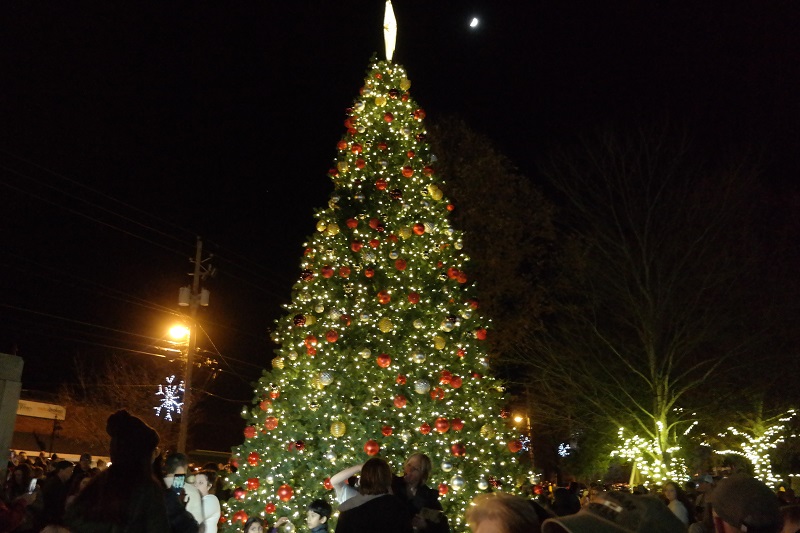 BLUE RIDGE, Ga. – The weather was chilly, but the spirits were warm and bright Saturday afternoon and evening during the Light Up Blue Ridge holiday celebration.

The day began with an arrival of a very special guest from the far north when Santa Claus arrived on the Blue Ridge Scenic Railway and greeted children, with wishlists in hand, in the downtown city park all afternoon. Storefronts decorated for the fourth annual Holiday Storefront Decorating Contest greeted shoppers up and down the downtown streets as many attempted to get an early jump on their Christmas shopping.

Throughout the day, several musical and theatrical acts entertained passersby at various places all afternoon including the Fannin County High School (FCHS) Theater Group and a barbershop quartet, both of whom performed at Sycamore Crossing, as well as Voices of Hope and a children’s choir led by Connie Davis. One of the houses in the Gingerbread Village at the BRMAA Art Center.

Over on West Main St., the Blue Ridge Mountains Art Association Art Center hosted the annual Gingerbread House Village for those wanting to take a quick break and warm up from the busy and blustery downtown streets.

By 5:30, night had fallen in north Georgia, and it was time for the annual Blue Ridge Christmas Parade. Starting near First Baptist Church, the parade looped down East Main, Mountain and West Main streets, which were all lined with excited faces, young and old, packed earmuff to earmuff on the sidewalks to take in all of the festivities as well as a few pocketfuls of candy. Blue Ridge Police Chief Johnny Scearce led the way down the the route in his squad car followed by Mayor Donna Whitener and City Councilwoman Rhonda Thomas close behind in convertibles draped with Christmas lights and City Councilwoman Elect Robbie Cornelius following shortly behind them.

Fannin County Fire and Rescue Chief Larry Thomas escorted Georgia State Senator Steve Gooch in his familiar white truck as Gooch and his family visited Blue Ridge for the day to take in the Holiday celebration and treats. The Fannin and Copper Basin Girl Scouts council marched the route with smiling faces and handfuls of candy to the delight of several youngsters lining the sidewalks.

The FCHS Color Guard and Marching Band served up several rousing renditions of everyone’s favorite Holiday tunes while the Drumline joyfully pounded out the beat on instruments encompassed with red and green Christmas lights.

Several businesses and organizations, including Mercier Orchards, The Home Depot, the Blue Ridge Community Theater and PruittHealth of Blue Ridge among others, contributed elaborately designed floats and displays for the parade. On the Special Olympics float, Snoopy even took time to  make an appearance. On another float, the Reason for the Season was portrayed as Mary and Joseph watched over Baby Jesus, who was “wrapped in swaddling clothes and lying in a manger.”

Rounding out the parade was Jolly Ole Saint Nicholas, who was escorted down the route in an antique 1930 Ford. Later, Santa took center stage in the park as he assisted Shannon York with the lighting of the 27-foot tall Great Tree to the amazement of many enthusiastic onlookers.

As the night quickly grew colder, country music star Collin Raye warmed the hearts of the crowd with a soulful version of O, Holy Night.

Holiday festivities will continue on weekends throughout the season in downtown Blue Ridge leading up to Christmas as the most wonderful time of the year is officially underway.