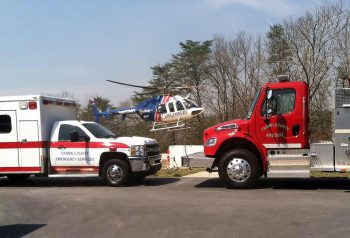 As Fannin County grows so do the issues that our emergency crews face. Call volumes for emergency responses have been steadily increasing, and with Copper Basin Medical Center limiting their hours of operation, there is expected to be even more calls.

Graham is preparing for this by updating our existing ambulances and securing new ones.

On September 21, 2017 Fannin County EMA teams welcomed the newest member to their vehicle fleet. This new ambulance will allow room for our EMTs to cover increasing call volume. 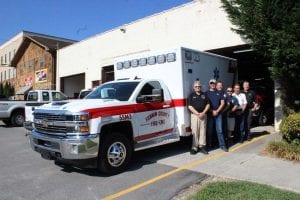 A new ambulance arrived to Fannin County. Graham hopes this will help with increase demand.

Graham announced at the Fannin County Budget Workshop that Copper Basin Medical Center will be closing their Emergency Room and operating on limited hours as a walk-in clinic. This will add strain on our Fannin County team.

This new policy at Copper Basin Medical Center went into effect on September 30. Patients being transported from Polk County to Fannin Regional Hospital will have to rely on Fannin County ambulances for a return trip.

Graham said, “The ambulance service that is in Polk County is privately owned and they are refusing to pick up patients at Fannin and transfer them back to Polk County.”

He did confirm that in the event of an emergency in Fannin County, Polk County ambulances were still on call and willing to help.
At the September 26 Board of Commissioner’s meeting a request was made for the purchase of a new command vehicle. The price on this vehicle is $27, 069.58.

Post Two Commissioner Larry Joe Sosebee wanted clarification on where the money for this vehicle would come from. He asked, “Is that out of this year’s budget or next year’s?”

Finance Director Robin Gazaway confirmed that the purchase of the new command vehicle would come from the 2017 budget and that the department still had plenty of funds to cover the cost.

The Board of Commissioners voted unanimously to approve the purchase of this vehicle.

The EMA department’s 2018 budget proposal would cover the costs of one additional ambulance for the department as well as the remounting of a current ambulance box to a new chassis.

Graham stated that the additions to the fleet will help with increased call volume and free up engines to cover special events, such as games, races, and festivals.